Salt Glaze Pottery – how it’s made! 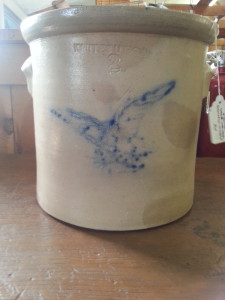 How is Salt Glaze Pottery made?

The salt glaze is formed on the unglazed body by reaction of common salt with the clay body constituents, particularly silica, toward the end of firing. The body should ideally be richer in silica than normal stoneware, and iron impurities can help produce good salt glazes. A reduction atmosphere can be employed as the reduced iron silicates are very powerful fluxes.

The salting mixture of sodium chloride and water is introduced into the kiln when the appropriate temperature is reached, typically around 900 °C. As the kiln reaches higher temperatures, typically 1100-1200 °C, the sodium chloride vaporizes and reacts with steam to form hydrogen chloride and soda. These react with the silica in the body and other body constituents. A glaze of fairly high alumina content (0.6 molecular parts) and a relatively low silica content (2.6 molecular parts), and in which the main base is soda, is formed. Salt glazes have been improved by the addition of borax, and sometimes sodium nitrate, to the salting mixture. Colouring oxides can be incorporated in the salting mixture to give decorative effects, such as a kind of aventurine glaze.

Salt fumes in a firing atmosphere react in the following way:

In soda firings the reaction is a little more direct, not requiring the presence of water vapor:

Both the hydrogen chloride and the carbon dioxide are gases; they do not react with the sodium oxide that binds with the silica and other components of the clay body. Hydrogen chloride leaving the kiln will form a hydrochloric acidvapor on contact with moisture in the air or kiln exhaust gases. Any remaining sodium oxide will form salt by reacting with hydrochloric acid vapour as the gases exit the kiln. The sodium oxide (Na2O) reacts with the alumina and silicain the clay body to form a sodium alumino-silicate glaze.[43] The general reaction is shown below, with the values for x and y varying dependent on the amounts of sodium oxide, alumina and silica composing the glaze:

Salt can also be used as a decorative element on selected individual pots. Biscuit ware can be soaked in a brine solution to create salted patterns. Rope and other textiles can also be soaked in brine and wrapped around biscuit ware. Salt can also be added, in solution, to coloured clay slips and can be sprinkled onto biscuit ware in protective, ceramic containers called saggars. A related technique, soda firing, substitutes soda ash and / or sodium bicarbonate for common salt. Whilst the application method is a little different, the alternatives need to be sprayed into the kiln, results are similar to salt glazing but for subtle differences in texture and colour. Source: Wikipedia