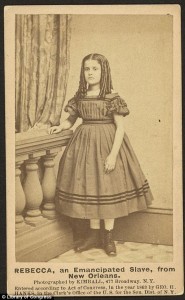 We recently came upon a batch of old civil war photographs and among them, we found two so-called “white” slave child photos.

In the 1860’s, eight former slaves aimed to drum up support for struggling African-American schools.

In order to gather sympathy and funds from rich northerners as they toured the country, organizer from New Orleans portrayed the slaves as white for a propaganda campaign, using four children with mixed-race ancestry and pale complexions.

They believed the white faces of Charles Taylor, Rebecca Huger, Rosina Downs and Augusta Broujey would encourage donors to sympathise with the plight of recently-emancipated slaves and give more generously.

To the Editor of Harper’s Weekly:

The group of emancipated slaves whose portraits I send you were brought by Colonel Hanks and Mr. Phillip Bacon from New Orleans, where they were set free by General Butler. Mr. Bacon went to New Orleans with our army, and was for eighteen months employed as Assistant-Superintendent of Freedmen, under the care of Colonel Hanks. He established the first school in Louisiana for emancipated slaves, and these children were among his pupils. He will soon return to Louisiana to resume his labor.

Rebecca Huger is eleven years old, and was a slave in her father’s house, the special attendant of a girl a little older than herself. To all appearance she is perfectly white. Her complexion, hair, and features show not the slightest trace of negro blood. In the few months during which she has been at school she has learned to read well, and writes as neatly as most children of her age. Her mother and grandmother live in New Orleans, where they support themselves comfortably by their own labor. The grandmother, an intelligent mulatto, told Mr. Bacon that she had “raised” a large family of children, but these are all that are left to her.

For a private viewing of the slave photos or the other Civil War photos, call us at 508-2432-4220 or email harwichantiquecenter@comcast.net