History of Sound Recordings and the Phonograph

We have no idea what music sounded like before the late 1800’s. We can read descriptions and imagine it, but we will never be able to actually hear it. Can you imagine if you could hear a recording of Beethoven playing or the songbird Jenny Lind singing? 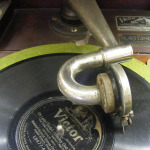 In 1857 Édouard-Léon Scott de Martinville of France invented the phonautograph. Sound vibrated a diaphragm. The diaphragm was attached to a stylus (needle) that would drag onto a soot covered paper wrapped around a cylinder. It was not intended for playback. He wanted to “see” sound.

The earliest surviving recording is from 1860. It is 10 seconds long and is a ghostly voice of a woman singing “Au Clair de la Lune”. Listen to it here: http://www.youtube.com/watch?feature=player_detailpage&v=7Vqvq-f-UtU 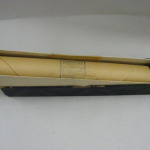 Before recorded music, the only way to hear music was to go to a concert or performance, listen with a musical watch, automatons like the one in Hugo that played music, music boxes and player pianos. In the 9th century, the Banu Musa brothers from Baghdad invented the earliest known mechanical musical instrument, the hydro powered organ which played interchangeable cylinders automatically.

In 1877 Charles Cros invented a process and machine called a Paleophone where the recording could be played back, but he was a poet and made a meager living, therefore he didn’t have the money to actually build one.

Thomas Edison also “invented” a talking machine. He had money behind him and was able to produce this machine. He announced his invention to the public in 1878.

“Mary had a little lamb”, recorded in 1885 is the oldest surviving Edison recording. Here it here:   http://www.youtube.com/watch?feature=player_embedded&v=Yv1emaQFg2w

1888 The second oldest surviving Edison musical recording was recorded in 1888 – Handel’s “Israel in Egypt” – The conductor was Sir August Manns, conducting an orchestra of some 500 musicians and a choir of over 4,000 voices, in front of an audience of 23,722 people at the Crystal Palace in London  hear it: http://www.youtube.com/watch?feature=player_detailpage&v=-qDwz3JdD1c

Another early recording (1888) featuring music and comments towards the end by English Composer Sir Arthur Sullivan:

Alexander Graham Bell’s Volta Laboratory made several improvements in the 1880s, including the use of wax-coated cardboard cylinders and an improved machine called the graphophone. This was the beginnings of  Columbia records.

Attempting to discover how the ear detected sound, he used a human ear (including the internal parts) from a cadaver, attaching a stylus to the eardrum and using it to make a recording.

In 1890, the first recording was made by an African American artist, George W. Johnson.

Around 1890 Emile Berliner invented the flat phonograph record. His new invention was called the gramophone: http://www.youtube.com/watch?feature=player_detailpage&v=UKeZHFI4wvI

The phonograph was mainly used for talking dolls, talking clocks, dictation and just voices speaking. Edison started recording music for commercial use around 1887. 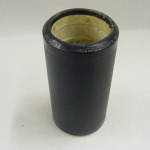 In 1902, Edison Records introduced Edison Gold Moulded Records, cylinder records of improved hard black wax, capable of being played hundreds of times before wearing out.  Before that, records could be played 4-5 times before they wore out, so singers and musicians had to record a song hundreds of times.

Edison, Victor and Columbia were the first main record companies.  The records ran at 60 – 130 rpm. 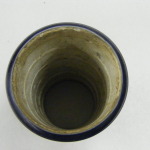 It wasn’t until 1910, artists’ names began to be added to the records. Before that, Edison was just promoting his business or the composer.

Emerson Records was a record label active in the United States between 1916 to 1928. Emerson Records produced between the 1910s and early 1920s and offered generally above average audio fidelity for the era, pressed in high quality shellac. Victor Emerson was an employee of Columbia records. 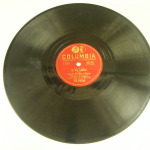 In 1920, the 1st electrical recording (recorded with a microphone) was made at the Westminster abbey in London.

In Feb 1925, the first electrical musical recordings were made by Art Gillham, the popular “Whispering Pianist”.

The LP – “Long Play” 33 1/3 was introduced by Columbia Records in 1948 and it is usually accepted that this was the first long play record, but in 1931 RCA Victor had released a long play 12”, Beethoven’s Fifth Symphony, performed by the Philadelphia Symphony Orchestra under Leopold Stokowski. It was the first 12-inch recording issued. It was not commercially acceptable and it wasn’t until 1948 that Columbia released its versions of the long play.

The first 10” LP (CL 6001) was released in 1948. It was a reissue of the Frank Sinatra 78 rpm album set The Voice of Frank Sinatra. The first catalogue number for a 12” LP, ML 4001, was the Mendelssohn Concerto in E Minor for Violin and Orchestra, Op. 64, played by Nathan Milstein with the Philharmonic-Symphony Orchestra of New York conducted by Bruno Walter.

The first recordings by the “president’s band” the U.S. Marine Band led by John Phillip Sousa were made in 1890. 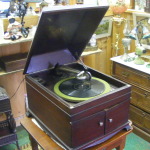 Other notable dates in recording history:

1894 Len Spencer and the Imperial Minstrels made the first series of recordings of a contemporary minstrel show.

1895: The first recordings by an operatic artist Ferruccio Giannini.

1897 marked the first of a long series of comedy monologues (starring Cal Stewart as Uncle Josh) with continuing characters. It was a kind of recorded rural “situation comedy”. These were very popular with Americans for the next 22 years, before radio.

The first recordings of campaign speeches by presidential candidates were recorded by 1908 William Howard Taft and William Jennings Bryan.

In 1916, the Chicago Symphony Orchestra conducted by Frederick Stock made the first U.S. recordings by a full symphony orchestra.

The first popular recordings of jazz were made in 1917 by the Original Dixieland Jazz Band.

Materials used in recordings: Most of the 1888 recordings were formulated from a combination of ceresin wax, caranuba wax, stearic acid, and beeswax.

After that everything from paraffin wax, aluminum, sodium carbonate, sodium hydroxide, steric acid, metallic soaps and coconut oil were used.

In 1912 celluloid was introduced. Discs were shellac. Styluses were made of Sapphire and diamond.